Volunteering - First Aid at the Kerry 24 Hour Endurance Run. Someone has to do the 4:00 a.m. to noon shift!

Yet that's what over 100 crazy...er....strong willed runners attempted in Tralee, County Kerry at the Kerry Endurance Run.  A runner could sign up for a six hour, 12 hour, or 24 hour running slot from noon Saturday to noon Sunday in Tralee Town Park.  Some friends that I had met at the Achill Ultra (http://www.achillultra.com) were running it - sooooooo i knew I was going to go watch. WATCH, people - watch!!! As I'm a Kerry Civil Defense volunteer, when they (www.civildefence.ie) put out the call for a Sunday 7:00 a.m. shift, to volunteer at First Aid, I knew I was a go!!

I arrived in Tralee & checked in at Castle Hostel (www.castlehostel.ie). I've stayed here before, and I like it. Plenty of public sitting areas, electricity AND reading lights on every bed, best of all Stephen & Aileen (the owners) are a joy! I then walked over to Tralee Town Park - where the Rose of Tralee festival is celebrated with statues, lists of Roses, and the most spectacular collection of rose bushes I've ever seen in one place!

The runners were on hour seven at this point - seven hours of running! Unbelievable. They were running the 3/4 of a mile loop around the park, over and over; a few were running solo but many were running in couples, chatting away as if it were a Saturday morning run and they would head over to Costa Coffee when they were finished! Wow! 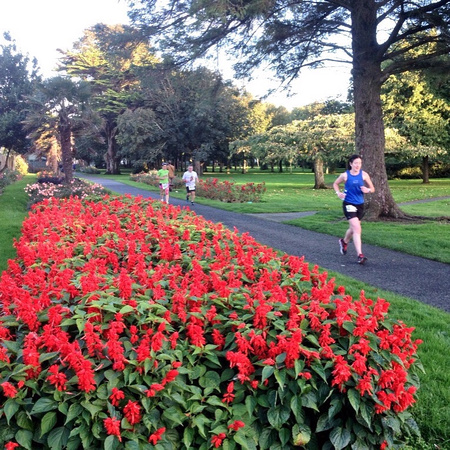 I saw my friends - Donna from Mayo wearing the fluorescent lime green sunglasses, Ger in his Cystic Fibrosis Ireland purple, Michael (Up the Kingdom!) and others. Gavin - a runner I met in Achill - was Donna's support team. As you can imagine, support in this type of race is massively important. Someone needs to help keep an eye on your hydration; your food; your pace; your clothes (wet, dry, warm, cold). He's a runner himself, but injured at the moment, or I'm sure he'd be out there, too!

There were over forty runners doing the entire 24 hour run. The support teams were amazing! Some had tents and sleeping bags; some had cars with all sorts of supplies; some had camper vans with stoves and hot tea brewing at all hours! Just amazing to see the friendship and camaraderie of the runners and support groups.  Someone running wants a tea, and their support team is on an errand? No problem! Someone will share!  A lovely feeling all around.

I headed off to eat dinner - feeling slightly guilty as I downed my lovely Indian food at Indian Castle Restaurant  (http://www.indiancastle.ie) knowing that the athletes were running into hour nine! Heading back as the day was ending, I was lucky enough to view a lovely sunset, with St. John's Church spire in the distance.  Red sky at night - let's hope that's a runner's delight!  The group was still running strong, and over the next few hours the 12-hour runners were seeing the finish line in their mind's eyes!  It was such a delight to see so many people hitting goals they had trained for - some maybe previously doubtful of the outcome. Lots of blisters, but lots of love scattered about, too!

It was quite special to see the runners going through the dark park (check out the video link in the photo album). If you stood away from the  well lit starting area, you could let the darkness surround you, then begin to notice lights - most runners carried torches - moving along the edge of the park.  Some had lights on their hats - those white lights were smoothly flowing through the darkness. Some carried torches in their hands - those swung back and forth, back and forth, a bit more disjointed to watch.  I walked around the 3/4 mile route a few times; surrounded by darkness, not using a torch, just my eyes adjusting and keeping an eye out for the glow sticks placed along the route ever 20 feet or so.... it was calm, peaceful, and special.  But it still didn't want to make me TRY it!!!! ;-) 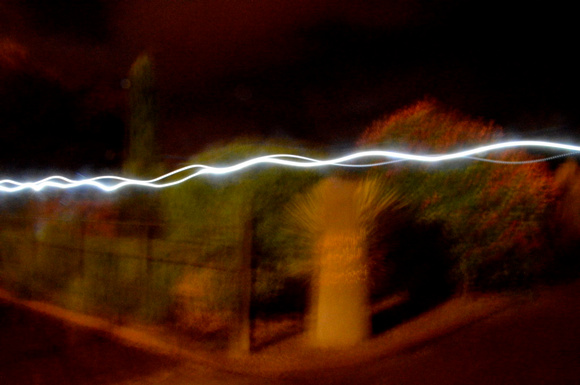 I left around midnight, knowing I was "on duty" at 7:00 a.m.  Tomorrow would be a long day for those runners!

I arrived at 5:00 a.m. thanks to two very drunk French girls who came back to the hostel at 4 am (for the 2nd night I heard later) disrupting everyone there.  As I was having a tea at 4:15 a.m. at the hostel kitchen, and knock at the door started....and continued....and continued.  Finally, another guest who had gotten up at 4:00 answered, and reported it was a very drunk young man looking for a place to stay..... Of course, check in hours at most hostels outside of big cities aren't 24 hours, so off he went to sleep in his car!

Back to the run: 5:00 a.m., dark and quiet, the lap counters still there in lovely monkey hats (whatever keeps you warm!) and Donna was wearing funky colorful tights to help keep us all awake! I stopped into the First Aid/break room at the Kerry County Museum (www.KerryMuseum.ie) next door. One guy was laying on the floor with his legs up on a chair. "Ankle injury. No running for me. I can't believe it. But its right. I can't go on. I've made my peace."  Another runner laying on a cot, wrapped in a sleeping bag: "Too many painkillers. can't keep anything down. throwing up water!" - the night medic took his blood pressure: all well, she said. As she walked out the door he turned to me and said "come make sure I'm still breathing in 20 minutes!?" I did. He was.

The dawn broke, and it was lovely. The weather app was looking ominous (www.meteirann.ie) as heavy scattered showers were predicted. A shower started! Amazing! It lasted about three minutes, and we had crisp dry weather the rest of the morning!  A woman nearby pulled out a barbecue and began grilling up sausages and boiling potatoes! She shared, of course. They hit the spot!!

I became aware around 10:30 that more spectators had begun to arrive. I heard a cheer and the first 100 mile runner hit the finish line! Got a few photos and then -- off he ran! He wasn't stopping at 100 - he was running the full 24 hours!! Bit by bit more people hit their 100 km and 100 mile goals.... all kept running. Cheers at each lap..... "You're looking good!" I said to one man (Hell, I can't imagine what I would look like at this point - if still conscious!). He yelled back "you're a great liar!"  which got a few laughs - and continued to, every time he said it!

Tourists began wandering by - and were flabbergasted to discover the runners were running 24 hours! "I thought it was a 5k!" said one Dutch tourist. "Oh! Can I take photos?" said an American. The crowd was building.  Another Civil Defense volunteer popped by with his son to see "what running 24 hours looks like!"

The last 45 minutes were spectacular! The guy that had the bad ankle and wasn't going to finish? He was up and limping along.... A 19 year old - wrapped-up-knee and all - was limping/jogging along, too - with his concerned mother hovering nearby.  One of my friends had earlier said "I need mass more than I need this 24 hours!" so had just returned to finish off with her friends.  There were slow walkers, there were strong runners that looked like they were as fresh as if they had just started. There were lots of smiles. Lots of grimaces. Oh, who am I kidding - more smiles than grimaces, without a doubt. 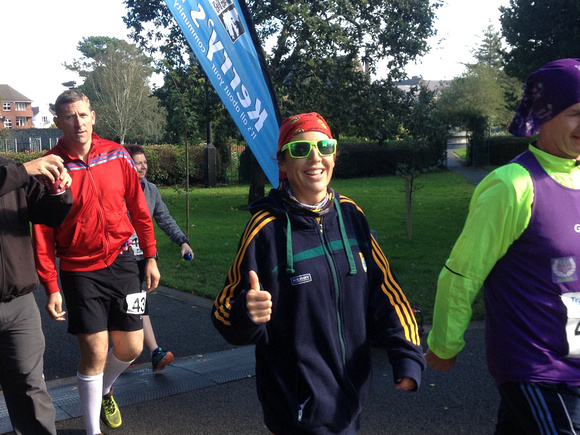 The Finish!! My friend Donna McLoughlin at the finish!

All told, of the 40 who signed up for the full 4 hour run, over ten ran over 100 miles.  An amazing experience to see - and an amazing event to dream about, someday. 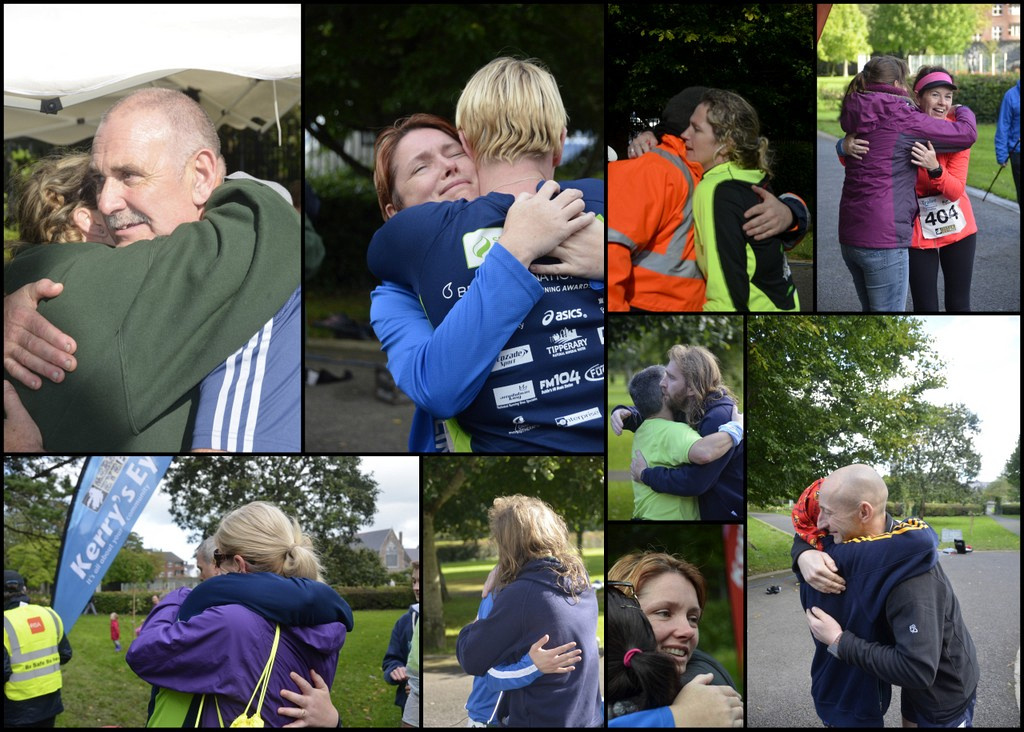