PEOPLE IN IRELAND - A continuous stream!

Following is a continuously updated post that highlights many of the people I meet as I wander around Ireland. Some on walking trails, in hotels, hostels, pubs, on buses, while cycling..... One 80-something German who lives here calls out to me, when we part,  "Don't talk to strangers!" laughing away!

Met this group of ladies enjoying a spectacular sunny day at the Gap of Dunloe, in Beaufort (outside of Killarney). They were enjoying the walk, but had to head north to Galway! I told them to be prepared: the scenery on the drive up there was pretty spectacular, and no matter what the gps tells you, you'll want to stop and take photos at every turn! 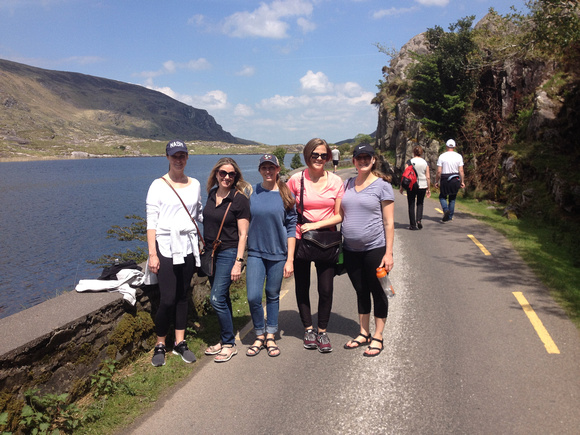 Yanks at The Gap! Americans enjoying a sunny day at The Gap of Dunloe, in Beaufort, Ireland

Hmmmm - a self-explanatory photo on St. Patrick's Day in Ireland! It's her first ever Ladies Day!

The one on the left, silly! Met this lady, Marina, at Gowran Park Races last week. She runs a pub - Dunphy's Bar - in Kill, County Waterford.  She had a bus load of forty women heading to the races for Ladies Day!! I asked her "what about the men?" and she laughed: "Forget them, the have fun all the time!"

Her hat is from Ruby's Hat Hire. 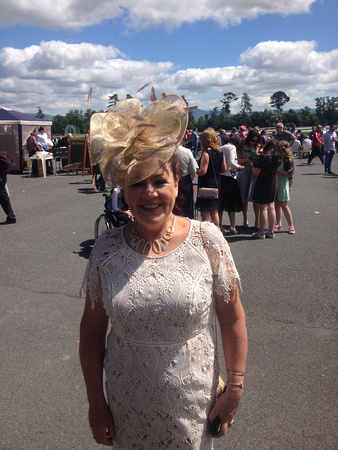 What a story! These four Manchester, England, were having a tea break in RossPoint Cafe next to Rossbeigh beach. They were celebrating the 25th anniversary of walking The Kerry Way!! Twenty five years ago, there were few signs, and fewer people! Back then, they stayed in rooms over the Post Office in Kells - now still a Post Office, but also a fantastic cafe and gift shop called Goldens of Kells!

I asked them if they were walking this time and they laughed:  "too many bad knees!" they said! We decided that wasn't old age, but rather too much hill walking in their youth! 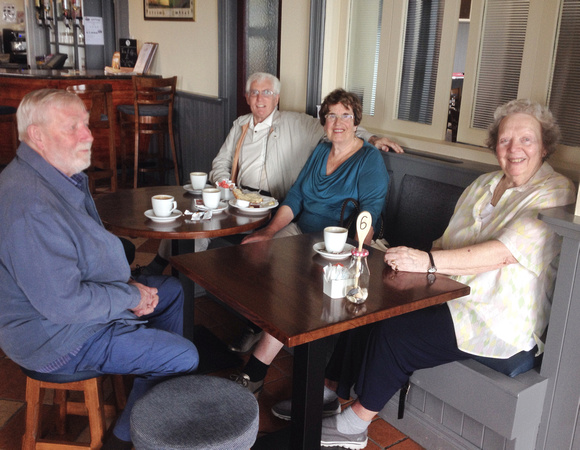 Manchester couples enjoying IrelandCelebrating a hillwalking adventure from 25 years ago!!

Meet Patrick Twomey! He's cycling to Northern Ireland along the Wild Atlantic Way (and farther!) to raise funds for Pieta House (an Irish suicide awareness charity).  I'm doing a longer blog post solely on him that should be up by end of today!

Suffice to say in this abbreviated post: he's 71, has only been cycling for five years, and is VERY motivated to get to the Irish Open at PortStewart Golf Club by July 8th!  Best of luck, Pat!!

You never know what or who you might come across as you travel around Ireland. I was cycling the Skellig Ring road one day (a small part of the Wild Atlantic Way, just off the Ring of Kerry road), and came upon this fine gentleman near Ballinskelligs. He was out for a stroll!

Definitely not a conversation you would have had in a car or a bus zooming by. Slow down, and meet the locals in Ireland! 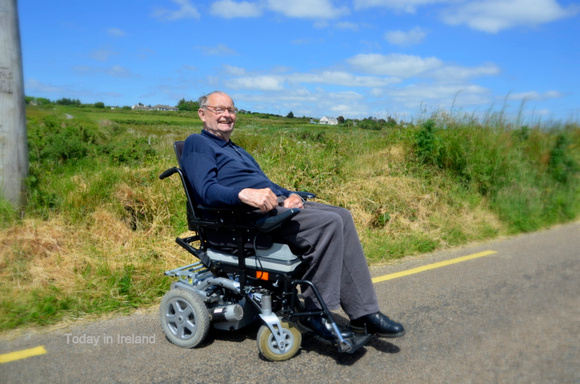 A gentleman in BallinskelligsCaught up with this happy man as I cycled around the Skellig Ring!

A family from Beaufort, on vacation at Parknasilla Resort. One of the kids gets car sick, so they can't travel too far on holiday. So they stay at Parknasilla for a treat! Lucky kids!

We stayed there for our first wedding anniversary. I won a gift voucher for dinner in a photography contest. That gift voucher turned into five fantastic days at a wonderful resort! Walking trails, kayaking, golf, archery, cycling, a spa, outdoor hot tub..... I could go on and on, and I will in another blog post! I met these two after I saw them surfing in Waterville. They work for Irish Gap Year and travel around Ireland showing American kids how beautiful it is, volunteering at events, getting a bit of education..... What a great job! 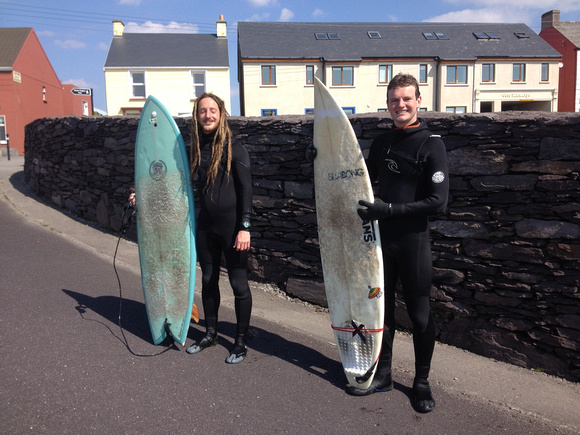 I met these two when I was doing laundry in Glenbeigh! Americans, they had spent a few months traveling around Ireland. Loving every minute of it! 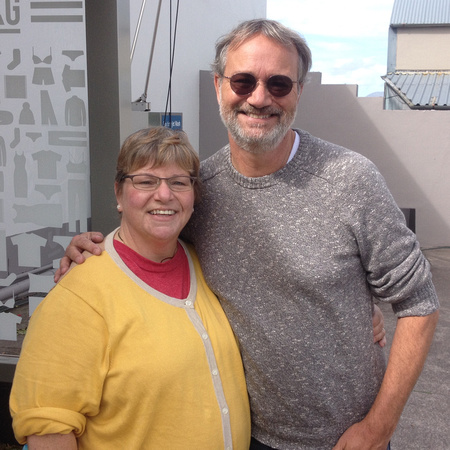 I met these two one VERY early morning at Ross Castle! Enjoying this beautiful day! From Philadelphia, Pennsylvania, they are spending a couple of weeks traveling around Ireland - hoping to end up in Sligo near extended family. They laughed about the phrase "we should live here!" They said it once, and laughed. Then said it again, and then again. "The more we say it, the more it's becoming a goal and not just an aside!"

They're staying at The Malton Killarney - wonderful old train station grand hotel; the perfect place to experience the Irishness of Killarney! 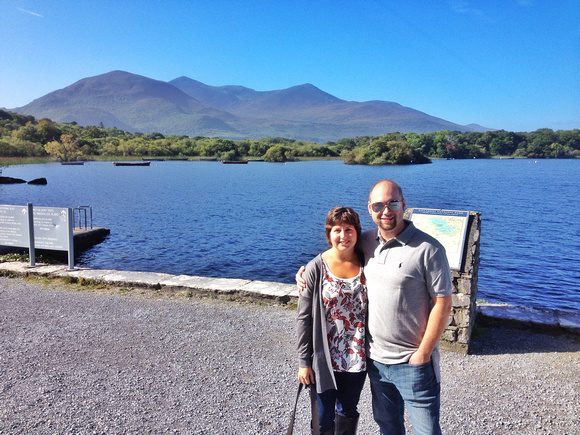 Enjoying the lakes of Killarney on a beautiful day!

I met this woman as she stopped to take a photo on the hill up beside Rossbeigh beach.  She didn't speak much English, and I speak no French, so we didn't have a long conversation. I was able to determine that she had cycled from Dingle to Rossbeigh that day. I was wowed by her shoes! She said "No one needs to wear those ugly cycling shoes!!"  I love that!! French cyclistShe cycled from Dingle to Rossbeigh, this day!

Here are her shoes: 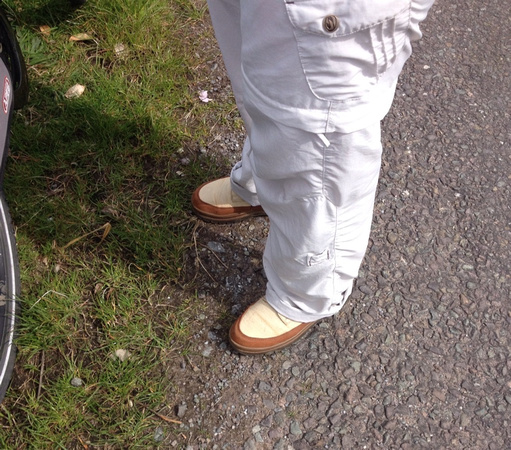 Coast Guard helping with first aid as I ran the half marathon during the Achill Ultra.  When I complained about a blister during the half marathon (most were doing 39 miles and planned to do it again the next day!) along the beautiful Wild Atlantic Way around Achill Island, he said "No guarantees, but you might keep your foot!" 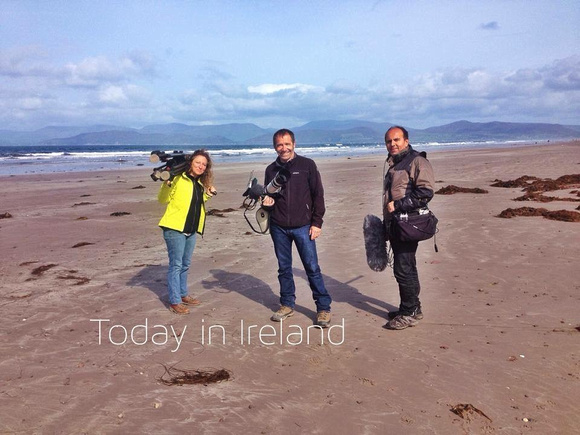 This surfer was taking a break from the waves (they'd gotten small AND it's gotten pretty darn windy, here!) to pick wild blackberries.  He's going to make blackberry jam.  He exclaimed "there's so many, I'm going to need another bag!"

Just a three minute walk from the Ring of Kerry road, in Waterville. 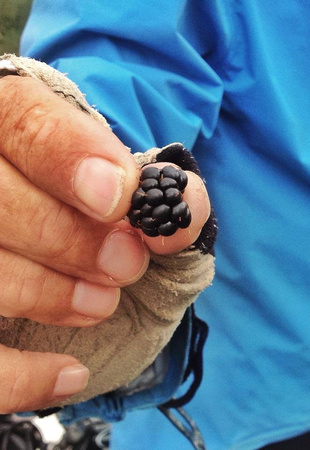 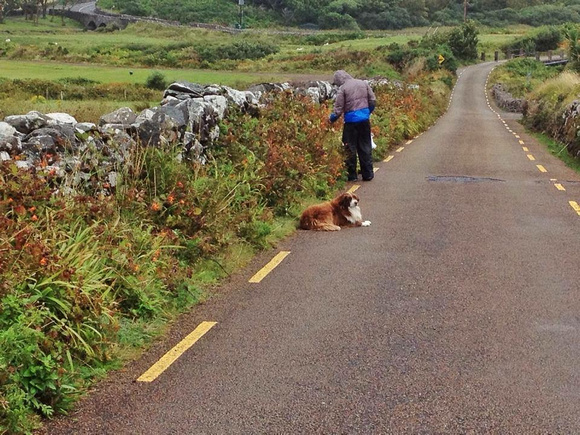 Saw some kids jumping off a pier into the sea. As a couple of girls climbed out over the rocks and onto the pier, I asked them "Can you do that again and let me take your picture?"

One girl said "Hell, no! It's freezing!"

Luckiy, the others were game! "This is my wife's dream trip! Her grandparents were from Ireland. Even the 5 and 9 year olds love it. They found that awesome playground over there!"

"There's a playground over there?!" 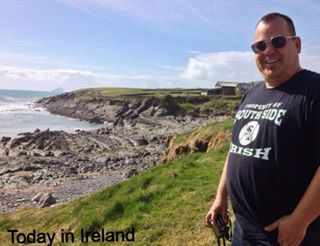 Fish delivery to your door!

"Broke down with a full load of fish. All that fish and no one to sell it to!" 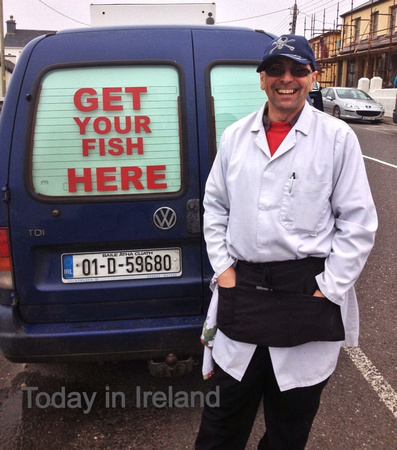 Tinahely Agricultural Show and Fair. They start the horsemanship early in Ireland! (Her grandfather was a professional hunter!). 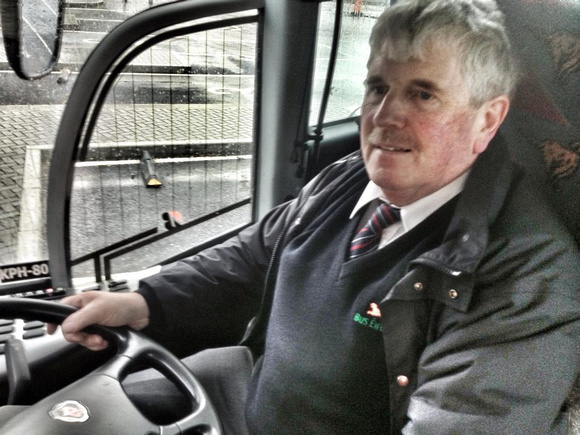 My wife and I went to San Francisco in July. She had to buy a fleece AND a hoodie! It was crazy!"

He's my savior - er, I mean the stove man. I had quite a problem with smoke pouring out of the top of the stove when the wind came from the West. Which of course, it often does in the West coast of Ireland!! One time the smoke billowed out so horribly, a neighbor came by and said "I thought the tower was on fire! I saw the smoke a block away!!"  This man helped by teaching me about coal and wood stoves - but what REALLY helped was finally getting an H-cowl for the chimney!

When I offered him a cup of tea, he said "Lovely!" then added "Do you have any biscuits?"  When I said no, he sighed and shook his head, saying "We're turning into the English."  As you can imagine, I now keep biscuits in my cupboard for when anyone - workers or friends - call in! 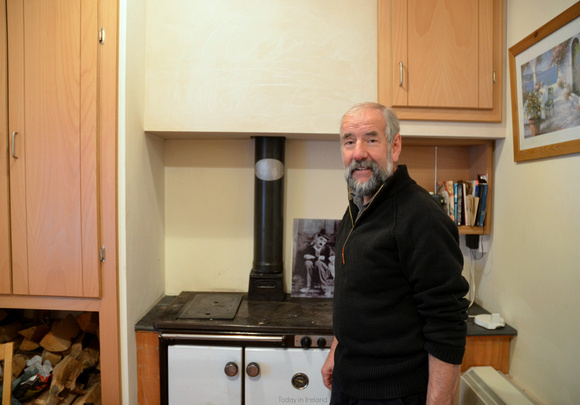 Met an interesting couple from Cork at a star-watching all-nighter. They built their own 3-D printer!! They made this robot necklace out of their home made 3-D printer! They are so cool!! 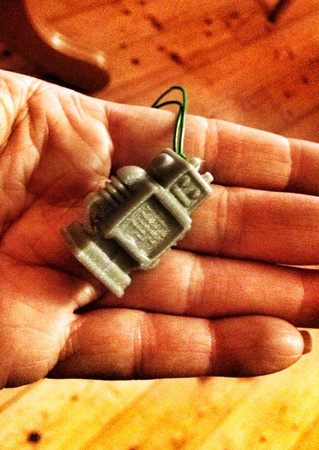 A shop owner in Killarney. 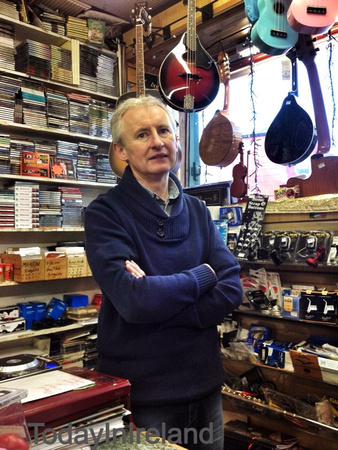 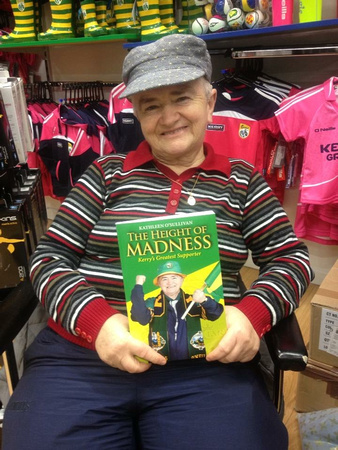 Can you let me off here? he says, in pouring rain, to the bus driver.

Then he grabs his guitar, hops off the buss, put up his hoodie, and trudged off into the distance - in the middle of nowhere.... 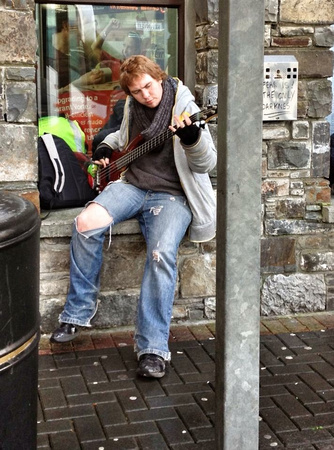 They walked into An Corcan Cafe and first thing they said was "it's warm in here!"

"You're American?" I asked.

"We're here to spread the ashes of our step-sister and dear friend around Dromoland Castle. It's what she always wanted." A very important trip to Ireland

Tourists from Miami, Florida. I found them taking a photograph of the two toy leprechauns perched among the roots of a huge, lovely tree.  Turns out there are kids/grandkids back home - age 2 and 4 - who are getting a series of photos emailed to them of the leprechaun sighted while they are sightseeing around Ireland! German tourists about to board a Ryan Air flight at Kerry Airport.

"Excuse me? Could you use an umbrella? They won't let us take this on board!"

I broke in the VERY nice umbrella within 45 minutes. 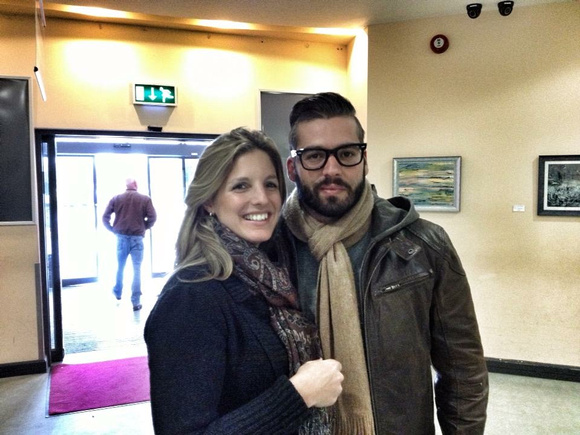 Angel McGee(non-registered)
Hi, just wondering if you had made your post of your day at Skelig Michael? Remember you met us at the top and took a picture of us- Star Wars fans.