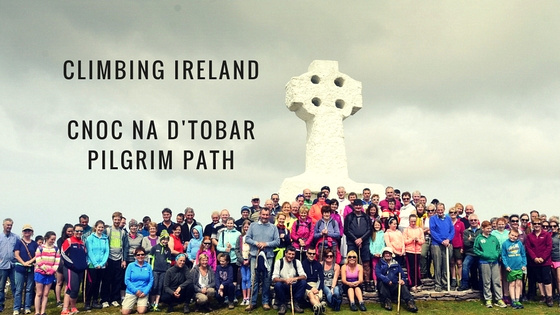 Climbing in Ireland: the Cnoc na d'Tobar pilgrim path! Friends gather for mass on a hilltop in Ireland! This is Ireland! Cahersiveen.

I've heard people talk about "knock na dubber" for ages, but to be honest I didn't really know what it was (or WHERE it was!). I just knew it was nearby Waterville!

A neighbor invited me to join her on a walk on a recent Sunday. She said "Want to go on a walk and hear mass at the same time?" and laughed. Well, that's exactly what we did!

Cnoc na d'Tobar is a 690 meter mountain just off the Ring of Kerry road, 4.5 kilometers outside of Cahersiveen town.  It's on the Irish Pilgrim Path list of pilgrim walks. (www.pilgrimpath.ie).  It was important in pre-Christian Ireland, when various assemblies - such as the festival of Lughnasa - were celebrated.  In the late 1800's a parish priest in Cahersiveen, Canon Brosnan, had built fourteen stations of the cross along the trail.  These crosses are still situated along the mountain path, (and are good stops to catch a breath or say a prayer!). 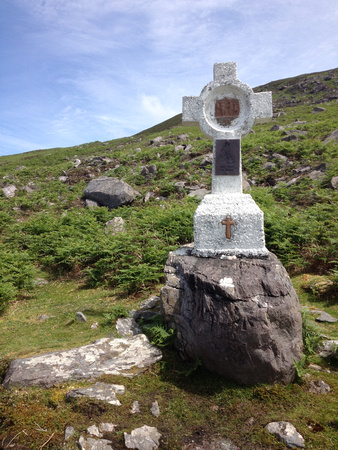 Station of the Cross on Cnoc na dTobar pilgrim walk in IrelandAs you walk up the hill at Cnoc na d'Tobar you can say your rosary at the stations of the cross! Near Cahersiveen, Ireland

There's a parking lot at the base of the hill - just a few euros to drop into a lock box.  Then up you go - over hill and dale as the saying goes! You DO need to know that the way is wet, and rocky, and for some it would be a challenging climb.  As we started up the hill, we could see other pilgrims making their way to the summit.  We stopped and looked at a beautiful blue bay, with the Dingle peninsula in the background. A man was walking nearby, so we chatted our hello. It turned out to be the priest! Father Larry! He told me he's only been doing this mass a few years, as this is a new parish to him. Here's the priest in disguise!

We continued on, with stops to read the bible passages at (most) of the crosses, and a break for water and a snack.  There were many hellos as the locals were known to my friends I was walking with.  It was a lovely day, and everyone was enjoying the challenge and the weather!

Up to the top, we heard mass. It was an amazing experience, let me tell you. 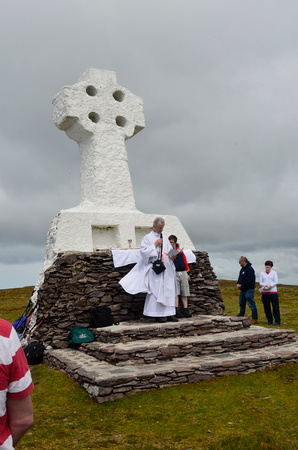 After the mass, I took a photo of most of the people (and a few of the dogs!) who attended. Then we enjoyed views of the Wild Atlantic Way, Dingle peninsula, and Ballinskelligs Bay, and walked down. It's just like they say - going down can be harder than going UP!  As I mentioned - it's wet and rocky, some of the rocks are a bit slippery. Be careful!

One of the men in my group mentioned to me "I've lived my whole life near here, and never done this walk. Every time I drove through Cahersiveen I would look up at this mountain and think someday I would walk to the top. I'm THRILLED to have had the chance to do it! Now I'll brag to my friends!"

I highly recommend the walk, yes - but more than that, I highly recommend doing a bit of digging to discover what small community event like this is going on as you travel around Ireland.  This mass is said the last Sunday in May.

After we were finished, we dropped another friend off to her house. And had tea and a glass of wine to celebrate our accomplishment! As you do! 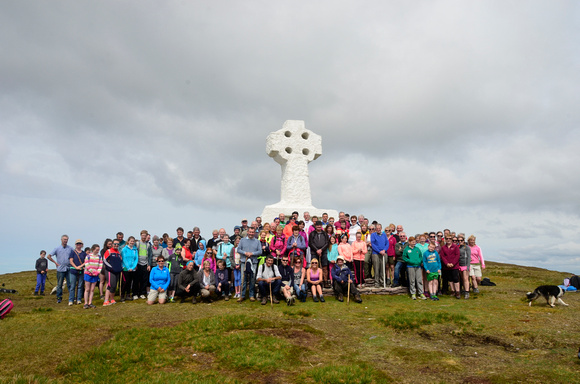 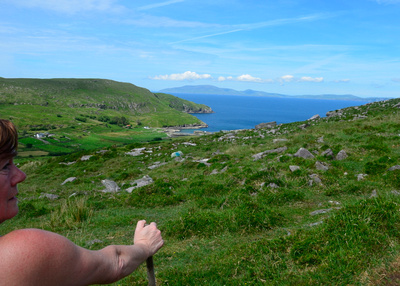 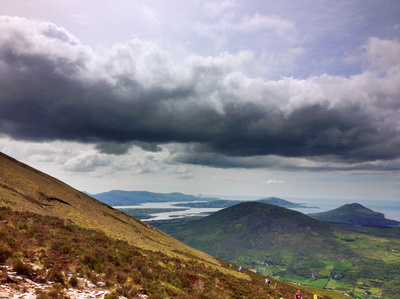 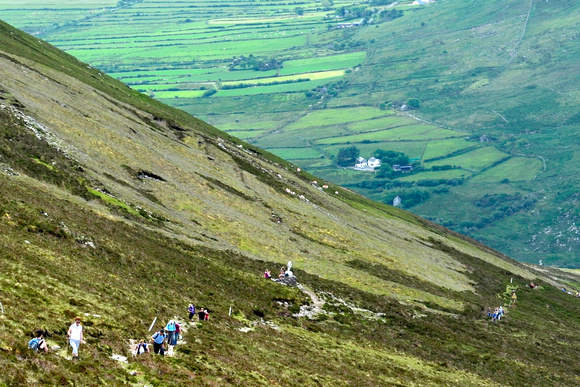 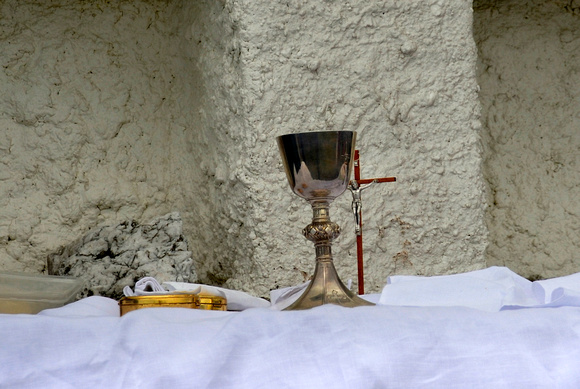 The chalice on top of Cnoc na d'Tobar, Cahersiveen 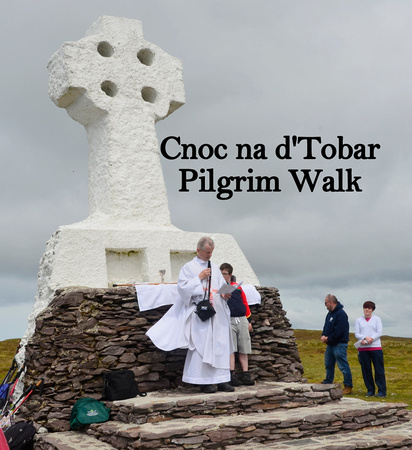 The cross at Cnoc na d'TobarThe priest says mass on a hillside in Ireland. Overlooking the Wild Atlantic Way and Skellig Islands!

Tjipke van der Velde(non-registered)
I am in search for pictures of all the crosses of Cnoc na dtobar.
Who can send them to me?