A chance meeting brings me to a hill walk on a farmer's private land near Derrynane! 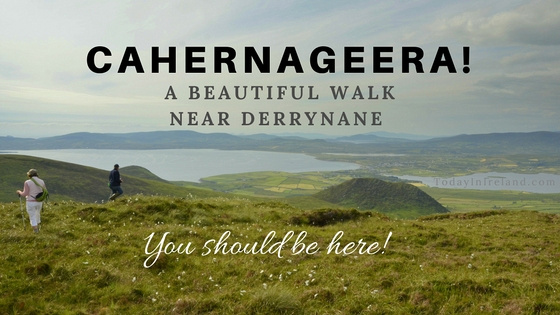 Cahernageera, IrelandWalking near Derrynane, Ireland off the Ring of Kerry road.

After meeting new people at a Caherdaniel-Derrynane conference along the Skellig Coast, I was invited back a few days later to have lunch and a walk with Jean - a local community volunteer, and Michael - a sheep farmer (also involved in Derrynane's community). I cycled over Coomakista along the Wild Atlantic Way on a beautiful, but breezy, sunny Sunday noon.  Cycling in Ireland is a joy - when it's sunny and brisk. (It's a challenge when it's lashing!). The views down onto Derrynane are fantastic on a clear day, and they didn't disappoint....

The directions are like so many in Ireland: "After the fourth B&B, go down the hill until you see a road with 5 signs. Look up to your right and see an unmarked gravel road with a barn. Head up that way and it splits - I'm on the right."  I had to push the bicycle up the very steep gravel drive, and when I knocked on the door I admit I held my breath for a few moments: as I told my host when she opened the door "Until someone opens the door, I'm never entirely SURE I'm knocking on the door at the correct house!"

What a treat! Fresh crab for lunch - with home-grown lettuce from the garden! Beautiful views down onto Derrynane from the hill; I thought to myself "is every view REALLY going to be prettier than the last?"  Jean's garden was full of blue and purple and pink and white. Does anything beat a huge growth of calla lilies overlooking a Caribbean blue bay? (see photo album)

Michael brought his dogs (yippee!) and we headed off (or should I say UP!) the hill into his property after lunch.

Lucky dog! Sheepdog in IrelandMichael's sheepdog runs us ragged along the Cahernageera hillwalk near Derrynane! Very close to The Kerry Way.

Walking on The Kerry Way or any of the many "official" walking/hiking paths in Ireland can be challenging at times. Walking along sheep paths can be VERY challenging! It was a steep hill, boggy terrain, wet at times - but no matter what I stepped in it was hard not to trip from looking around me so often! OK, so I did trip. One step up over a wall, putting my shoe in was easy, going over and pulling it out was an entirely different matter! I went down (slowly - sort of a controlled fall). No injuries other than pride! And when Michael said "It would be a pity to walk the whole way and then fall down below!" (meaning the EASY part!!!) I couldn't help but laugh!

I got a lesson in sheep farming - how they keep track of the sheep (tags, electronic tags); how they build the fences over such harsh terrain; how to pull a lamb out of the mother when something's not right; how to separate them and care for them. We saw a little fellow limping along - he'll need to get looked at tomorrow....

Our lasted about five hours! We saw views over the McGillycuddy Reeks, looked down onto Lough Currane and Ballinskelligs Bay - a scene that looked like a map laid out before us. Just beautiful.  We even saw the Skellig Michael and Little Skellig from this height - awesome!  We looked upon a large stone covered hill as we viewed Waterville - a hill I see every morning when I look out my window. I've always wanted to hike this - getting this close makes be realize what a serious hike THAT would be.

Michael inherited his property when he was 11.  He's been working it since shortly after that. On the land is the house of his family from the past - called a "Famine House," which he thinks must have been built in the 1700 or 1800's.  To stand in a house that old, with still-solid walls, beautiful views, a huge fireplace....you can just imagine a family living what surely was a hard life in that place in those long ago days. From the top of a hill we could look down and see many a ruin such as this - a Sullivan house here, a Shea house there.  Michael knew so much abut the area it was a joy to spend the hours on the hills. 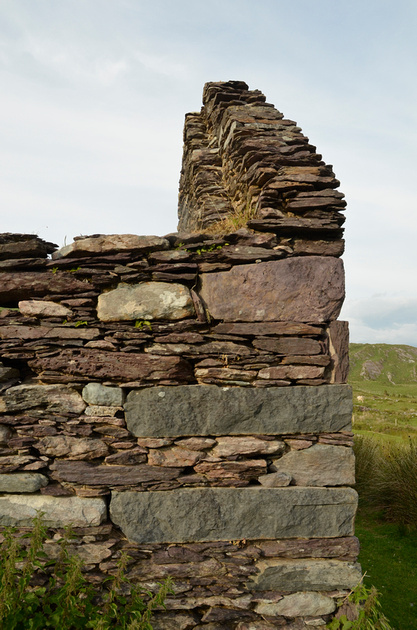 A ruin of an old house in Cahernageera.Old houses and new adorn the countryside in South Kerry, Ireland

When I look down on scenery such as this in South Kerry, I feel sorry for the people that do the Ring of Kerry bus tours. I was one of those people last year, and I can remember looking longingly out the window and thinking "I want to go there!" or "Why don't we stop HERE?!" I couldn't help but remember that and remind myself how lucky I am to have come BACK to South Kerry without being rushed through on a tour bus.

If you want to check out a few photos, see the album entitled Cahernageera Walk. 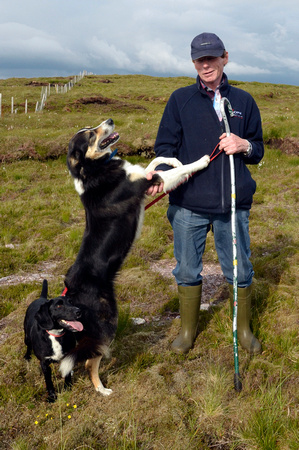 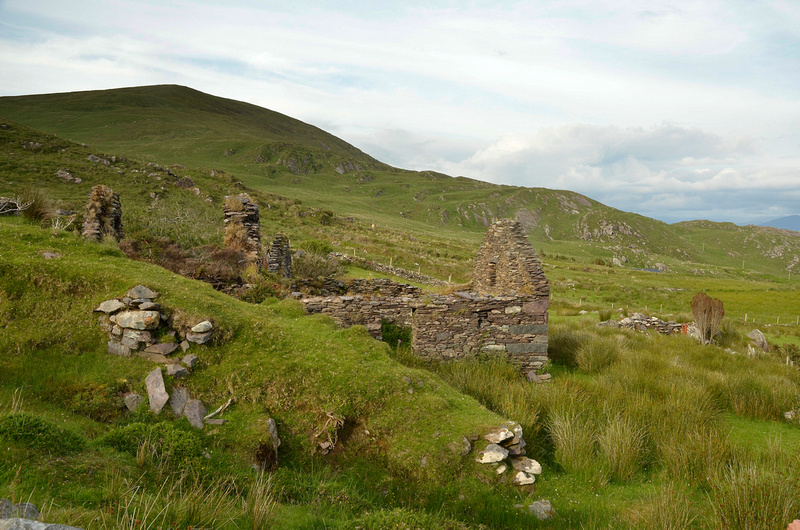 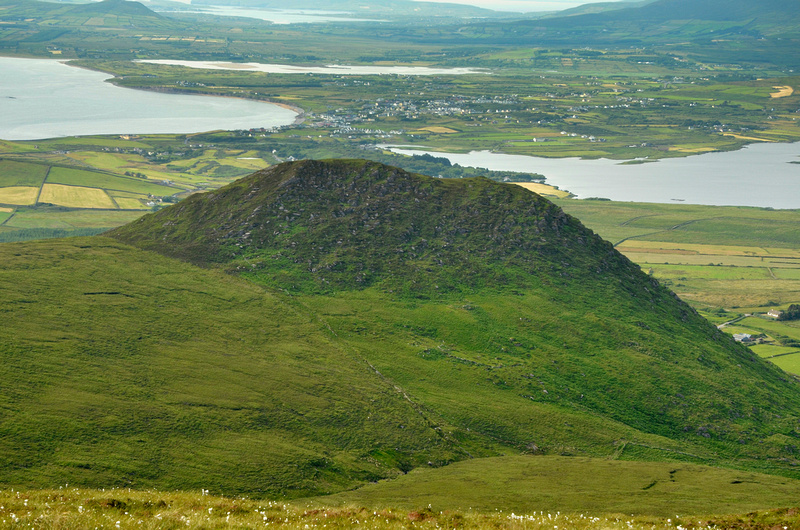 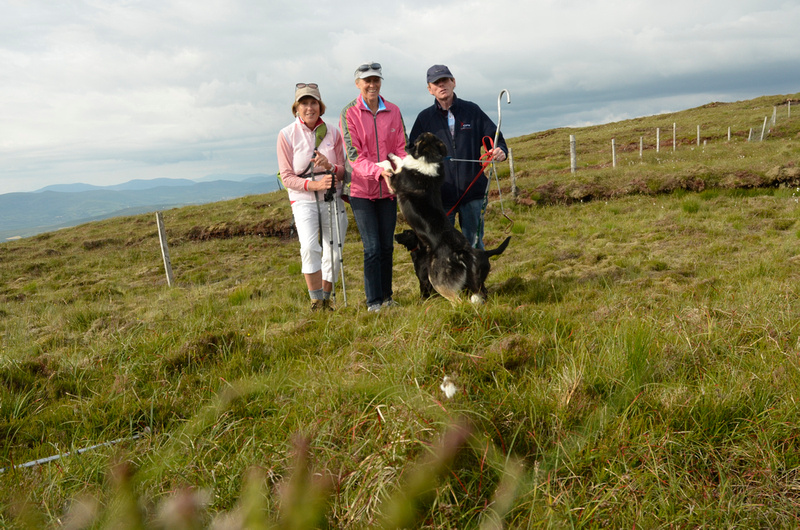 Using the timer! Jean, me (Susan Baughman) and MichaelSelfie! The collie dog had the most fun, I'd say! #todayinireland

More on Derrynane can be found at Vinnie Hyland - Wild Derrynane - here: www.vincenthylandartist.com/

If you want to see LIVE photos of the Derrynane area, check out this webcam!!  Click HERE.